Surely many of us have toyed with the thought, how well would we be able to utilise such a reel, which speed and line retract capability could be easily adjusted at any time during the whole fishing

And really, it is a great thing to adapt to the needs of the moment, but, I ask the question, was on the market any reel hitherto, which is designed for this purpose and equipped with a freerunner? Well, the answer is: no. Since now!

The Energofish recognised the niche in the market, and, taking into consideration the needs of the fishers, as a result of careful design work, has created Carp Expert Double Speed.

With the special reels, produced in different sizes, we are able to maximally satisfy the needs in regard of the more sensitive picker rods, the more serious longcaster feeders, as well as the general carp and boilie rods!

The matt black coating gives a modest appearance to the reel, which has aimed to fulfil with its every last elements the highest demands of modern feeder fishing. Its spooling is absolutely smooth and vibration free, and, in addition, silent. The aerial work of the 9+1 bearings will satisfy even the connoisseurs.

The freerunner of the Double Speed can be precisely calibrated, the mechanism enables the fisher to select the appropriate tensile force from a wide scale. The precision of the main brake system is almost astonishing, it really indeed challenges the best quality Japanese reel brands at anytime, anywhere.

Commonly known, that the freerunner system’s material requirements fundamentally raise the weight of such reels. In case of the Double Speed, the freerunner system and the shift system together barely raise the weight of the reel! As an example, I would mention that the 3000 (mm) size weights 406 g, while the 4000 (mm) size weights 510 g, due to the results of my own measurements.

The Double Speed is equipped with a pull-down roller (needle roller) system backstop, I tried out its two-speed mechanism at the first time during the filling of the line spool. The fill of the line spool-when shifted to max gear ratio-takes only a few short minutes, a roll of feeder line (150 m) can be spooled in a few minutes. No tangles at all!

The 3000 (mm) sized tested by me exceeded all my expectations. My fast paced fishing full of catches was not able to create such a situation for the little reel, which it couldn’t easily solve, during the fragment of a second.

I could easily solve the task of feeding at a very long distance much faster, in a much shorter time, thanks to the 6,7:1 gear ratio I could also unspool my rig for refilling, rebaiting, even in case of void strikes. The effective, „net" time of fishing (when the rig is at the bottom, waiting stationery for catch) became relevantly longer!

The shift between the speeds became a routine even during the first fishing. One thing is sure, once we get used to and attached to it, we will not forgo it anymore!

We hope that race fishers will like it: the minutes spared by using it can mean more fish, more points, or even can decide the outcome of races! 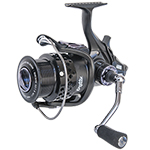